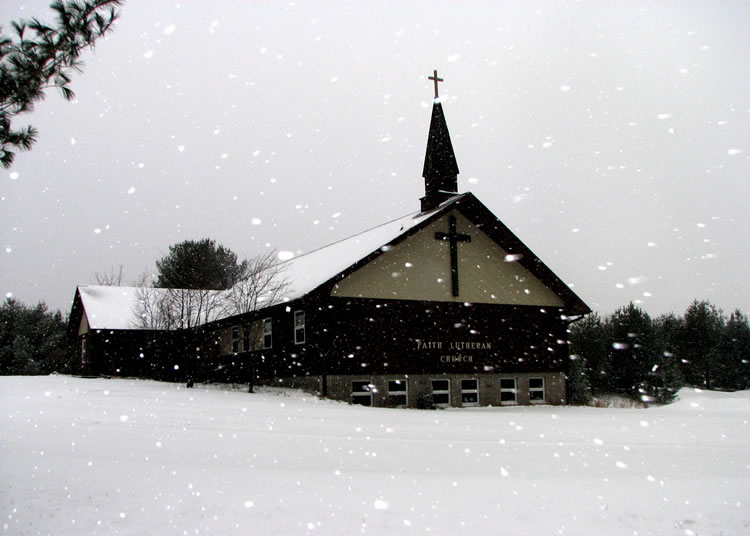 Trinity Lutheran Church of Rhinelander, with Pastor Check and their Church Council, gave us untold support. Trinity allowed Pastor Check to serve as our Pastor, and other members of Trinity provided additional assistance. On April 12, 1981, a group of dedicated Christians met in the basement of the Oneida Village. Through a process of elimination, a unanimous decision was made to name our church “Faith Lutheran Church”, as faith was absolutely necessary if our church was to survive, grow, and prosper.

Services were scheduled to begin on Saturday, April 18th, the evening before Easter 1981. We found we could use the Club House at Lake Terrace Estates, free of charge. And Trinity allowed Pastor Check to shepherd us, free of charge. The altar was designed, built, and donated by Jerry Hansen and was adorned with borrowed paraments from St. John’s, Ashwaubenon and beautiful Easter lilies. With God’s help we were on our way; 120 people celebrated the Resurrection of Jesus that evening!

Our first Sunday school class followed worship that evening. The next Saturday we moved the Bible Study Hour ahead of the worship service so it would not be so late for the little ones. After a few months it was necessary to move to a new location. We chose the Three Lakes Community Building as that was available free of charge on Sunday mornings.

Pastor Don White, our first assigned pastor, conducted our first Sunday morning service on November 1, 1981. Worship was at 9:30 with Sunday school at 10:30. With the presence of Pastor White, confirmation classes were started, and he was provided free office space in the Rod and Terri Ingram Building on the edge of town. At the renovation of this building into apartments, Pastor White moved the church office into the Three Lakes Office Center.

In February of 1982, a Men’s Chorus was started and shortly thereafter the women joined in. The Choir first sang on Palm Sunday in 1982. At the same time, Trinity assisted the women of Faith Lutheran as they formally joined the American Lutheran Church Women. In the summer of 1982, Pastor Alan Shaeffmier served as our pastor.

Finally, in February of 1983, Pastor Gary Garnatz became our first installed pastor. We purchased property on Highway 45, just east of the cemetery. We dedicated our ground on April 15, 1984, Palm Sunday….our Third Anniversary. Ground breaking was celebrated on March 27, 1987 and the construction of our building began. With Al Huffman in the lead, members contributed countless hours. On March 19, 1989 the first worship service was conducted in the basement of the new building. And at long last, on July 16, 1989, the joyful members of Faith Lutheran Church gathered to dedicate the Sanctuary of the new building to the glory of God!

We believe that with God’s help all things are possible. All we have to do is look around us to see his handiwork…..with faith in God and dedicated workers, our mission and ministry continue in Three Lakes.

May 23, 1982
First confirmation class of six members was confirmed

November 22, 1987
Service of Dedication for the building

July 16, 1989
Service of Dedication for the Sanctuary
Purchased our church parsonage