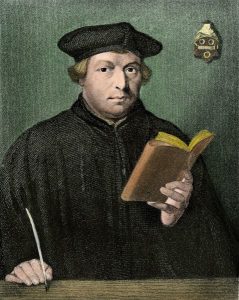 About Lutheranism:
Lutherans are Christians. Martin Luther (1483-1546) was a German theologian who realized that there were significant differences between what he read in the Bible and the practices of the Roman Catholic Church of the 1500’s. On October 31, 1517, he posted a challenge on the door of the Castle Church in Wittenberg, Germany entitled “95 Theses.” He was hoping to debate the posted 95 theological issues. HIs intent was that the church would reform its practice and preaching to be more consistent with the Word of God as contained in the Bible.

Sacraments
A sacrament is the physical sign of an unseen promise. Sacraments are rites of the church that convey God’s forgiveness, life, and salvation through words and physical means. Lutherans celebrate the sacraments of Baptism and Holy Communion.

Baptism
Baptism is the entry rite into Christian faith. It is an act instituted by God, performed using water in the name of the Father, Son and Holy Spirit, whereby the baptized person (infant, child, or adult) is united with Christ, becoming a child of God. Baptism is one of the Lutheran Sacraments, a physical sign of an unseen promise. It is a rite of the church that conveys God’s forgiveness, life, and salvation through words and a physical means.

Holy Communion
Communion is another one of the Lutheran Sacraments, a physical sign of an unseen promise. It is a rite of the church that conveys God’s forgiveness, life, and salvation through words and physical means. In Holy Communion, also called the Eucharist, Lutherans recall the saving acts of God through Word, bread and wine, and are connected with Christ and with Christians of all times and places. Lutherans believe that in, under, and with the bread and wine are the Body and Blood of Jesus Christ.

About the Norther Great Lakes Synod:
Lutheran Christians in the Upper Peninsula of Michigan and northeasters WIsconsin are on the edge of a new millennium. Walking together into a new century are the 94 congregations, 137 pastors, and 41,000 Lutherans of the Northern Great Lakes Synod of the Evangelical Lutheran Church in America (ELCA).
This Synod is one of 65 in the ELCA. The 11,000 congregations of the ELCA comprise 5.2 million baptized members. In 1987, the latest in a series of Lutheran church mergers created the Northern Great Lakes Synod (NGLS), encompassing the entire Upper Peninsula of Michigan and the six adjacent counties in northeastern Wisconsin. Learn more about the NGLS here.